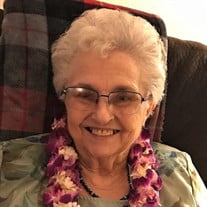 Ruby Faye Coble, 83, of Mansfield, Texas, passed away on Saturday, September 8, 2018, surrounded by the family whom she dearly loved. Ruby was born October 10, 1934 in Fort Worth, TX, to Sam and Allene Tye. On June 21, 1952 she married the love of her life, Harry Doyle Coble. Ruby and Doyle met on a blind date while Doyle was enlisted in the Navy and they began a sweet, and dedicated love story that lasted 66 years. Ruby and Doyle moved to Mansfield, TX in 1965, where they raised their five children. She was a devoted and loving mother that guided and encouraged and loved completely and unconditionally. Her home was warm and welcoming to family and friends, especially as they enjoyed her apple cobbler or homemade pickles. After her children all began school, Ruby began her career with Mansfield ISD. She worked as a librarian and nurse’s aide in the Mansfield schools from 1965 until her retirement in 1993. In their retirement, Ruby and Doyle and their beloved dog, Luke, traveled throughout the United States in their RV. After several years of traveling, they settled back in Mansfield and embraced their role as Nanny and PawPaw. Time with her grandchildren was a treasured part of her life. Ruby was an active member of the St. Jude Catholic Church in Mansfield where she and Doyle sang in the choir, and served in many other capacities. Her passion for benevolence led her to outreach and support for the organization Mothers and Unborn Baby Care. https://www.fvmubc.org/ Ruby is survived by her husband of 66 years, Harry Doyle Coble; daughter Teresa Coble Sherwood and husband, Donald of Mansfield; son Paul Coble and wife, Jill of Rendon; daughter Kimberly Coble Looney and husband Mike of Mansfield, and son Timothy Coble and wife Anki of Chez Bonneau, France. She is also survived by eight grandchildren; Sam Sherwood, Emily Sherwood Ramirez, Paige Coble, Brian Coble, Kelli Looney, Laura Looney, Andrew Coble and Sarah Coble; and three great-grandchildren Cooper Coble, and Bennet and Ila Ramirez; brother Weldon Tye and sister Bettye Howard. Ruby was preceded in death by her parents Sam and Allene Tye, her son Steven Mark Coble, and sisters Helen Austin and Dorthey Potts.

The family of Ruby Faye Coble created this Life Tributes page to make it easy to share your memories.

Ruby Faye Coble, 83, of Mansfield, Texas, passed away on Saturday,...

Send flowers to the Coble family.