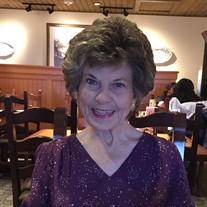 RUBY LEA WATSON December 4, 1941 - February 21, 2020 Ruby Ford Watson born December 4, 1941 in Alvarado TX and joined her father: William Henry Ford and mother: Lois Viola Tidwell in Heaven with our Father Jesus Christ on February 21, 2020. Ruby grew up in Alvarado TX graduating from Alvarado High School in 1959. In 1961, she and her sister in law, Brenda Ford, attended a social at the Nike base near Alvarado. At that event, Ruby met a young private named Gerald Dee Watson. Gerald and Ruby fell in love and married on May 4, 1962. After Gerald graduated from Officer Candidate School at Fort Sill, he was commissioned as a II Lieutenant and Ruby became an Army officer’s wife. They left the U. S. and while stationed in Germany, welcomed two children, Tammy Lea in (1964) and Geoffrey Dee in (1965). When their service abroad was complete, they returned to Fort Sill on the decommissioned battle ship U.S.S. Darby. Upon their return, another son, Jimmy Lynn (1966) joined the family. In 1969, Ruby and Gerald moved to Arlington TX where they welcomed the youngest of their children, Clifford Alan (1970). Ruby enjoyed spending time with her family above all. She treasured her grandchildren and great grandchildren and took every opportunity to love and spend time with them. In addition to caring for family, she enjoyed quilting, sewing, reading, and traveling with her husband Jerry. Ruby’s family was steeped in traditions such as baking chocolate chip cookies, making banana pudding and burning a pot of beans every Saturday. There was often singing the “Special Watson” version of Happy Birthday which meant everyone singing in the room was out of rhythm and off key. Last, and perhaps most perturbing for mom, was the annual Christmas Wrapping Paper fight after opening all our gifts. “Come on mom, we saw you throw that!” Ruby is survived by her children, Tammy Lea Watson, Geoffrey Dee Watson and wife, Beth, Jimmy Lynn Watson and wife, Pamela, Clifford Alan Watson and wife, Tessa, brother, Jesse Allen Ford and wife Brenda, her sisters, Billie Margaret Ford Shivers and husband Eddie, Lois Ann Ford Jones, brother in law, Jace Franklin Watson and wife Pheba. She is also survived by eight (8) grandchildren, sixteen (16) greatgrandchildren, seven (7) nieces and nephews, nine (9) great nieces and nephews, and seven (7) great great nieces and nephews.

The family of Ruby Lea Watson created this Life Tributes page to make it easy to share your memories.

Send flowers to the Watson family.