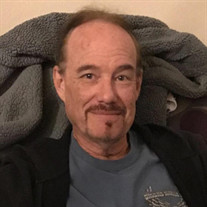 Scott Dennis Bormann passed away November 12, 2020. He was 57. Scott was born December 4, 1962 in Britt, Iowa. He attended high school in Fort Dodge, Iowa. Scott excelled in football, track and wrestling during his high school years. He had found memories of riding on the back of his mother’s motorcycle, his grandmother’s cornbread, and enjoyed riding his 1970 Chevelle. After high school, Scott attended Iowa Central Junior college where he earned an associate degree in automotive engineering and electronics. Scott played baseball at Iowa Central. Scott enlisted in the United States Navy in January 1983 as a Sonar technician petty officer 2nd class. He was assigned to the USS Barbey (FF-1088) and Naval Special Warfare earning the Navy Expeditionary medal, good conduct medal, meritorious unit commendation, various other ribbons, and honorably discharged in April 1989. Scott retired from Mouser Electronics in 2016 after serving 27 years as a product manager. Scott was responsible for several product categories during his tenure at Mouser. While working in the Products department, Scott found and developed many opportunities. His strength was not only technical knowledge but also building relationships with suppliers. If you were in a working relationship with Scott, it would probably develop into a friendship. Scott met Daria through Mouser Electronics and married in Las Vegas, April of 2011 with family in attendance. They travelled to visit family in Iowa, Massachusetts, and Florida. They attended the Republic of Texas Motorcycle Rally’s in Austin, Lone Star Rally in Galveston and Sturgis, South Dakota. Scott had many interests such as working on motorcycles, cooking and playing the guitar. Riding his motorcycle was a passion for him. Scott incorporated his motorcycle in many facets of his life. He enjoyed time spent with his wife, Daria, riding and traveling. He enjoyed canopy rides down west Broad street in Mansfield. Scott had a profound comradery with his brothers from the American Legion Riders Post 624 where he served as Director. Scott attended several benefit rides, rodeo’s, poker runs, and ALR state rallies. Scott is survived by his wife of 9 years, Daria, mother Ginny Filmer, Father Alvin Bormann, son Brandon Scott Bormann, daughter Alexandra Eve Bormann, and grandchildren Ava Marie Haddley, Jaxon Alexander Haddley, Ariyah Reign Haddley, Kitara Yumiko Bormann and Camryn Rogue Bormann. At the request of Scott's family, memorials can be made to the American Legion Riders PO Box 434 Mansfield, TX 76063.

Scott Dennis Bormann passed away November 12, 2020. He was 57. Scott was born December 4, 1962 in Britt, Iowa. He attended high school in Fort Dodge, Iowa. Scott excelled in football, track and wrestling during his high school years. He had... View Obituary & Service Information

Send flowers to the Bormann family.