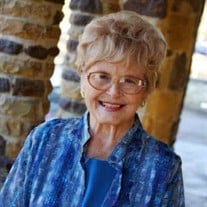 Born Shirley Francyne Scott on January 13, 1934, in Ft. Worth, Texas. She is better known to all as Nanny. Nanny has touched and influenced every part of our family’s lives. She was an amazing, loving woman that led with Christ. Nanny set an example for all on what it means to be humble, hardworking, and live with a loving spirit, and we thank God for her. Nanny’s father, Charles Israel Scott died when she was just two years old. Her mother, Mary Louise Springer, remarried soon after to Jo Frank Record, who Nanny loved dearly. Nanny had one brother Charles (Spizzy), and one sister JoAnn. Nanny’s early life was hard, but she told us all many wonderful stories with great joy. Nanny started cooking dinner for her family when she was very young. They had to turn over an apple box so she could reach the stove. She told the story of walking three blocks to her grandparent’s store to buy her first bill of groceries at age five that was a full dinner that she brought home in her wagon. We all also remember the story of “The Goat” that would not let her date walk her to the door when they came home. When she was sixteen years old, she met and married our papaw C.L. Glass on May 3, 1951. She was just in 10th grade, and papaw had just turned eighteen. He had to stop school before graduating because his father was dying of cancer. They dated for a little over three months before marrying. He had driven her school bus for extra money. And she recalls being dared to wink at him on the bus to get him to notice her. Together they farmed for over 40 years before he passed on July 24, 1999. Being a farmer’s wife is not easy. She spent countless hours working beside her husband. We all have fond memories of helping to prepare lunch to take to the field. Together they raised three children: John Henry, Janice Marie, and James Cleston. Nanny taught Sunday School, Bible School and was a substitute teacher for Mansfield ISD. To every child, she taught she would tell them, “Just call me Nanny.” As children, we can all remember going to the grocery store and constantly running into kids hugging and calling her Nanny. When she was not in the classroom, she was in the kitchen. Nanny taught all of us to cook. She helped all of us with our homework; she read to us, sang songs, played games, taught us how to garden. And if you have played Nanny in marbles, you know she always wins. She helped with all church events. And would proudly tell you one of her Apple Pies went for $60 for the youth program at church. She was a treasured member of Central Baptist Church in Mansfield for over 60 years and a member of the Mansfield and Venus communities. Nanny has nine grandchildren and twenty-five great-grandchildren, including bonus ones and ones on their way. All of us have wonderful memories of being rocked and sang to sleep by Nanny. While she sang her favorite hymn, I Come to the Garden. I’m sure all her grandchildren remember the “Nanny Look.” It was the look you got when she disapproved of something you said or did. Nanny didn't have to say a word; you just knew you were in trouble and you never wanted to do it again. And she never raised a hand. Shirley Francyne Scott Glass age, eighty-seven years old, went to be with our Lord Jesus Christ and her loving husband, C. L., in heaven at 4:55 pm on May 12, 2021. She was at home surrounded by her loving family after a long decline in her health. She is preceded in death by her husband, C. L. Glass, Parents: Charles Isreal Scott, Mary Louise Springer Scott Record & Joe Frank Record, Cleston L. Glass & Eva Duie Chambers Glass, Brother Charles Richard (Spizzy) Scott Record, Sister Jo Ann Record Shoemaker, and Grandson GySgt John David Fry. Her Surviving Family: Children: Johnny & Annette Glass of Venus, Janice & Jimmy Davis of Venus, James Glass of Mansfield, and Gloria McCaffrey of Venus. Grandchildren: Sanndee & Jason Hall, Leah Malone, Katy & Roger Goff, Malia Fry, Kimberly & Joe Kral, Richard & Chassidy Davis, Patricia Glass, Amanda & Jesse Jackson, Joseph & Stephanie Glass, Taelor & Josh DuMond Bonus Grandchildren: Marsha & Shawn Greene, Michael Amend, Issac & Kayla Sharp, and Noah Sharp, and many others who called her Nanny. Pallbearers: Richard Davis, Joseph Glass, Jesse Jackson, Roger Goff, William Goff, Gideon Fry, Joe Kral Honorary Pallbearers: James B. Glass, Christopher Goff, Ethan Goff, Garrett Goff, C. L. Fry, Michael Kral, Benjamin Davis, James D. Glass, Zayne Glass, J. W. Baily, Devin Jackson Nanny’s Favorite Bible Verse: Proverbs 3:5-6“Trust in the Lord with all your heart, lean not on your own understanding, In all your way acknowledge him and he shall direct thy paths”

Born Shirley Francyne Scott on January 13, 1934, in Ft. Worth, Texas. She is better known to all as Nanny. Nanny has touched and influenced every part of our family&#8217;s lives. She was an amazing, loving woman that led with Christ. Nanny... View Obituary & Service Information

The family of Shirley Francyne Glass created this Life Tributes page to make it easy to share your memories.

Send flowers to the Glass family.