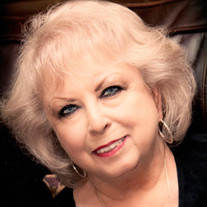 Shirley made her transition to heaven on January 11, 2021. She is now peacefully resting in the arms of Jesus, reunited with her soulmate Ed May and her beloved parents. Shirley was born to Flossie & Howard Donaldson on March 6, 1943 in Vandalia, IL. She was raised in St Elmo, IL, attended school throughout high school, was a baton twirling majorette and had several medals for her performances. She was also an honor roll student throughout her school career. Shirley married Larry Hodson and had 3 children, Kathy, Jill, & Doug. She was a stay-at-home mom by choice, as she wanted to influence her children’s lives positively. The first songs she taught them was “Jesus Loves Me” and Away in the Manger”. She was a Brownie troop leader and a classroom mom throughout her kid’s elementary school years. Shirley was an interior decorator for Sears and JC Penney in the mid 1970’s in Colo. Spgs. CO. She continued that career after moving to Arlington, TX in 1978. She received many awards for her creative talent in this field. Shirley volunteered many hours for the Tarrant Co. Women’s Shelter for which she received a Volunteer of Excellence award. Shirley began a second career at American Airlines in the early 1990’s, which allowed her to make trips back to Illinois to care for her aging father. It also afforded her the opportunity to travel the world with family and friends. Shirley had 9 grandchildren that she adored and doted on every given opportunity. She later had great grandchildren that she loved dearly and showered them with gifts. In 1998 she met her soulmate Edward D May, and gained a much-loved step-son Patrick May. Shirley & Ed traveled around the country in their RV and spent time between their homes in Granbury TX and Horca, CO. Their retirement years together were the happiest years of her life. She cared for Ed tirelessly in his last months at home in Granbury. Her heart was broken at his passing. Shirley was preceded in death by her parents Flossie & Howard Donaldson and her beloved husband Ed May. She will be missed terribly by her children and spouses; Kathy & Hal Mueller, Jill Melchiorre, Doug & Susanne Hodson, Patrick & Belinda May. Grandchildren: Jacqueline & Gino Clark, Danielle & Brian Barnett, David & Josie Mueller, Emily & Michael Kuentz, Meredith & Travis Morisoli, Jacey Melchiorre, Taylor & Jacie Hodson, Zachary & Mikaela Hodson, Megan Hodson, Sherron Wineinger & Mistie Lewis and 17 great-grandchildren, extended family and friends.

Shirley made her transition to heaven on January 11, 2021. She is now peacefully resting in the arms of Jesus, reunited with her soulmate Ed May and her beloved parents. Shirley was born to Flossie & Howard Donaldson on March 6, 1943 in Vandalia,... View Obituary & Service Information

The family of Shirley Sue Hodson-May created this Life Tributes page to make it easy to share your memories.

Send flowers to the Hodson-May family.