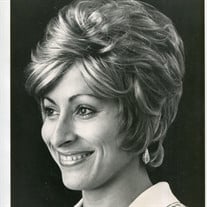 Sonia Pagan-Matos, 75, passed away October 6, 2018 in Mansfield. Sonia was born to Agustin Pagan Ruiz and Filomena Matos on October 20, 1942 in Santurce, Puerto Rico. At 5 years old, Sonia moved to New York City. Shortly after, she contracted Rheumatic Fever and was admitted to a convalescent home for 2 years. She attended Washington Irving High School in New York City, the greatest city ever to her, where she grew to love the vastness that is the New York City Library. At 21, Sonia was married to Fernando Cancel and brought three children to the world. At 21, she moved back to Puerto Rico where she worked as an administrative assistant at A.G. Becker and later for the Veteran’s Administration. Sonia was a single mother who raised her three children and got them all through college. Sonia eventually met the love of her life and married Alejandro Anglero’. Alejandro passed away in 1994. After Alex passed, Sonia moved to Miami, Florida where she lived until earlier this year. A man who became a very influential part of Sonia’s life, and her family’s life, was Alex “Abdul Bin Dollah”, Sonia’s step-father. She always held Alex in high regard, cared for him greatly and cherished their relationship. But the most love that she gave of herself was to her children and grandchildren. Being a mother and grandmother brought out her best self. Sonia raised three children to be great learners, caring people and great parents. She worked very hard to give all she could and was the best mother anyone could hope for. The legacy she placed with her children resounds in her grandchildren. In life, Sonia enjoyed the memories of the beach as a child, going on cruises, shopping, reading, traveling collecting pictures of grandchildren and most certainly the Weather Channel. Sonia is preceded in death by her husband Alejandro Anglero’, and parents Agustin Pagan and Filomena Matos. Sonia is survived by her three children, Stephen, Fernando and Vanessa Cancel, 10 sisters, Zelandia, Rosa, Pauline, Gladys, Irene, Diane, Angela, Lisa, Carmen and Sadie and grandchildren Stephen D. Cancel, Jr., Alexa Rodriguez, Etienne D. Rodriguez, Sophia F. Rodriguez, Emma R. Cancel and Alida M. Cancel. To those that knew and loved Sonia, she has left a legacy in all the hearts she touched. Those that adored Sonia are richer people because of her and she will always be remembered and cherished.

The family of Sonia Pagan Matos created this Life Tributes page to make it easy to share your memories.