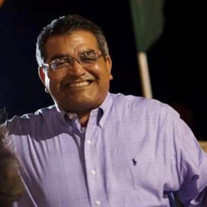 Steven Vasquez April 29th, 1962-September 9th, 2021 Mansfield, TX. Steve passed away September 9th 2021, in Mansfield, TX. Steve was born April 29th, 1962 in Big Spring, Texas. He grew up in Kemp, Texas. After graduation his family moved to Ft. Worth, Texas. He began his career at Safeway and worked his way into management while also going to college. His dream was to be a Postal Inspector and in 1989 his postal career began. He served his customers as a Rural Postal Carrier for 32 years while graduating college in 1994 and also running his Construction Company, Repair Experts. In 1991 he met his wife Glyn, along with 3 children Joseph, Andrea, and Matthew. He and Glyn moved to the country that Steve called “The Ranch". There he loved spending time with his grandkids. Steve is preceded in death by his father, Henry Vasquez, Sr, and nephew, Johnny Diaz. He is survived by his wife of 28 years, Glyn Vasquez of the home; children, Joseph, Andrea, and Matthew; mother, Isabel Menge and step-father Paul Menge; brother Henry Vasquez, Jr.; sisters Helen Mains and Alice Diaz; grandchildren Stephen “Bryce" Lawrence, Kirby Columbus, Rowan Columbus, Jodin Columbus; Uncles Ramon Montez and Joe Montez; and many nephews, nieces and friends. Steven Vasquez will be laid to rest in the Johnson Cemetery in Shawnee Oklahoma.

The family of Steven Vasquez created this Life Tributes page to make it easy to share your memories.

Send flowers to the Vasquez family.