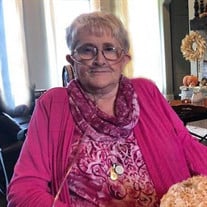 Sue Annette Sparkman was born October 18, 1948 to Robert F. Eagle and Leslie Arlene Eagle of Spokane, Washington.She went to be with Our Lord and Saviour on July 27, 2021 after a prolonged illness. She was the oldest of two children and grew up all over the world in her younger years. She Graduated from Burkburnett High School in Burkburnett, Texas a small suburb of Wichita Falls. She was an avid Barrel Racer in her teens and young adult life. She met the love of her life on a blind date while attending Tarleton State University in Stephenville, Texas. She Married George L. Sparkman on August 20, 1966 in Burkburnett, Texas . George was enlisted in the Air Force. Over the years they were stationed all over the world including Germany, England,Spain and Several bases in the United States, along the way they had 3 boys before finally returning home to Texas in 1988. Sue and George settled in Mansfield, Texas where they continued to raise their boys. The family was heavily involved in Boy Scouts. Sue became a Mary Kay Consultant and was involved with Mary Kay until about 2011, when she retired alongside George. Sue was heavy into Genealogy and was the family historian for many years .She loved spending time with friends and family and enjoyed road trips especially. She loved to see new places and learn interesting facts about the area. She Especially loved visiting areas where our forefathers had colonized,settled or where a major part of the history of the area. She is preceded in Death by her brother Robert of Seattle Washington, Her Parents Robert F. and Leslie A. Eagle of Spokane, Washington, Her Inlaws George B. and Mary L. Sparkman of Stephenville,Texas. Her Husband George L. Sparkman of Mansfield, Texas and her son Shaun M. Sparkman of Abilene, Texas She is Survived by her Sons Neil and Carleen Sparkman Of Midolothian, Texas, Chris and Anita Sparkman of Mansfield Texas. Grand Children Avery, Mason, Dallas and George. Brother in law Robert Sparkman Of Stephenville, Texas, Brother in Law Duane O. And Vickie Sparkman of Stephenville, Texas, Jason Sparkman of San Diego, California, Jordan and Kendra Sparkman of Houston, Texas as well as many Cherished Family friends and loved ones. She will be interred alongside George in a private ceremony at DFW National Cemetery at a date yet to be determined.

Sue Annette Sparkman was born October 18, 1948 to Robert F. Eagle and Leslie Arlene Eagle of Spokane, Washington.She went to be with Our Lord and Saviour on July 27, 2021 after a prolonged illness. She was the oldest of two children and grew... View Obituary & Service Information

The family of Sue Annette Sparkman created this Life Tributes page to make it easy to share your memories.

Send flowers to the Sparkman family.