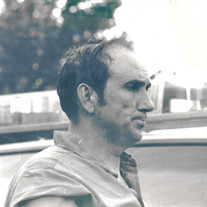 T.G. Ackerman, 92, went home to his Heavenly Father on October 16, 2019 while living in Mansfield. T.G. was born to Thomas Sylvester and Ruby Mae (Morris) Ackerman on August 24, 1927 in Mansfield. As a child, T.G. grew up during the Great Depression. As a young man of that era, he assisted his family and worked to help support his parents, one brother and two sisters. At the age of 10, he pulled onions for an onion farmer down the road from the family house and, later, drove a tractor for James McKnight on Mr. McKnight’s farm. T.G. is a member of the Class of 1944 of Mansfield High School and a graduate of the Cozzens Secretarial School in Fort Worth. As a member of the Greatest Generation, T.G. served his country, in the U.S. Army, from January 17, 1946 to July 31, 1947 and was a recipient of the Good Conduct Medal. T.G. had a substantial work ethic. During his working life, he served in several areas. At one point, T.G. was a 20 year employee of Red Ball Motor Freight as a truck driver and an employee of the City of Fort Worth, in many faculties, one being in collections. One of T.G.’s proudest occupations was his involvement in the Volunteer Fire Department of Mansfield where he attained the billet of Assistant Chief. A man of God, T.G. worshipped his Heavenly Father at the Walnut Ridge Baptist Church. He was also involved in his community and civic organizations. A proud Mason, and member of the Mansfield Masonic Lodge 876, T.G. attained the level of 32nd Degree Mason, a Master Mason, and an equally proud member of the Moslah Shrine Temple, serving as a Shriner. T.G. was a faithful husband to his beloved Earnestine for 73 years. He adored his bride and spending time in Branson, Missouri were highlights of their lives together. T.G. loved his family. His daughters, Pam and Paula, were provided for in all they ever needed and were led by a father who deeply cared for them. He enjoyed his grandchildren and great grandchildren. Spending time with them for special events such as birthdays, holidays such as Thanksgiving and Christmas, and watching them grow will always be a special place in T.G.’s family’s hearts. In T.G.’s spare time, he enjoyed woodworking. T.G. is preceded in death by his parents, siblings Ray, Mary and Betty and grandson Aubrey Earnest Holland. T.G. is survived by his wife Earnestine, daughters Pamela Ackerman Holland and Paula Ackerman Montandon (husband Tim), grandchildren Rachel (husband James), Ashley, Scarlet (husband T.J.), Miriam (husband Joey), and Grant (wife Amy); great-grandchildren Kendall, Layla, Reagan, Austin, Aston, Jarett, Aiden, Max, Emerson and Emma.

T.G. Ackerman, 92, went home to his Heavenly Father on October 16, 2019 while living in Mansfield. T.G. was born to Thomas Sylvester and Ruby Mae (Morris) Ackerman on August 24, 1927 in Mansfield. As a child, T.G. grew up during the Great Depression.... View Obituary & Service Information

The family of T. G. Ackerman created this Life Tributes page to make it easy to share your memories.

T.G. Ackerman, 92, went home to his Heavenly Father on October...

Send flowers to the Ackerman family.