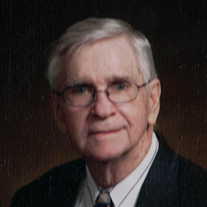 Theodore “Ted” Delaney Pearce, 84, went home to his Lord on July 18, 2018. Ted was born to James McMellon and Serena Easter (Williams) Pearce on January 30, 1934 in Vigas, Missouri. Ted was the youngest of three siblings who he has now met in glory. Ted obtained his Bachelor’s Degree from the University of Missouri and then became a commissioned officer in the U.S. Navy. With active and reserve service, he served 12 years, in total, during the Cold War era as an aircraft navigator. After Ted’s service to his country, he became an insurance agent which eventually led to the realm of insurance management. In June of 1965, on a meeting with a client, he encountered Mary Leis, the secretary to his client. From that moment on, and for 52 years, Mary and Ted built a life together, full of love that included two children, Jay and Trudy. Ted enjoyed his newspaper and FOX News, which he used to stay in touch with world events and “solve the world’s problems.” Christian by faith, Ted attended Acton Baptist Church and was involved in the Lions Club as well as Rotary International. He greatly enjoyed his family, as well as family vacations, to include going to “the farm.” Ted is preceded in death by his parents, James and Serena Pearce as well as his two siblings, Donald Pearce and Vanita Rogers. Ted is survived by his loving wife, Mary, son Jay Pearce, daughter Trudy Chun, nieces Laurie Hill and Holly Fields, grandchildren Brian, James (“T Jay”), Marie Anette and Nicole Diane Pearce; Nikoletta, Levente and Andrea Chun.

The family of Theodore Delaney Pearce created this Life Tributes page to make it easy to share your memories.

Send flowers to the Pearce family.