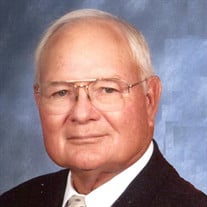 Thomas Wayne Butler, 84, of Grandview, Texas, departed this world peacefully on Friday, January 15, 2021. He fought a valiant battle against leukemia and was prepared to meet his Lord and Savior, Jesus Christ. Tom was ushered into heaven from home, where he was surrounded by his beloved wife Jane and their three children. Funeral services will be 3PM Monday, January 25, 2021 at First Methodist Church Mansfield (seating limited to 25/masks required) with livestream available at: FMCM.org/funerals In lieu of flowers, memorials can be made to Wesley Class at First Methodist Mansfield. Born May 5, 1936 in Gillham, Arkansas, Tom was the second of eleven children blessed to Thomas Gifford Butler and Ruth Estelle Ward. In addition to his parents, he was preceded in death by brothers Bobby and Sammy, and sisters LaNora, Billie Ruth, Patsy and Darlene. Upon graduation from high school, Tom proudly served in the U.S. Marine Corps, where he achieved the rank of corporal. He completed a tour of duty in Japan and then later, while stationed in Florida in 1957, he met the love of his life, Jane Moist of Lewistown, Pennsylvania at a skating rink in Pensacola. They married on December 31, 1958 and recently celebrated 62 wonderful years of marriage. Tom retired from American Can Company as a production manager in 1991 after 34 years of service. He enjoyed retirement to the fullest and especially loved fishing, hunting, raising crops and cattle. He had a large group of cherished friends and was a proud member of the Wesley Sunday School Class at First Methodist Church Mansfield. Tom was the greatest Papa in the world! He loved his grandchildren dearly and was so proud of their many accomplishments. He spent many happy years supporting them as they participated in baseball, softball, football and band. Tom is survived by his loving and dedicated wife Jane, daughter Joni Proctor and husband Mike, son Michael and wife Marta, son and best friend Richard; grandchildren Ashley Sabljakovic, Brad Proctor, Brody Proctor, John Swinford, Bonnie Diaz and Ryan Swinford; sisters Mary Jackson and Ellen Matthews; brothers Donald and Jimmy Butler; numerous nieces, nephews, great grandchildren, and beloved friends. Tom was truly an angel walking this earth! Although we are heartbroken to lose him and will miss him every single day, we are confident that he is already smiling down from heaven above.

Thomas Wayne Butler, 84, of Grandview, Texas, departed this world peacefully on Friday, January 15, 2021. He fought a valiant battle against leukemia and was prepared to meet his Lord and Savior, Jesus Christ. Tom was ushered into heaven from... View Obituary & Service Information

The family of Thomas Wayne Butler created this Life Tributes page to make it easy to share your memories.

Send flowers to the Butler family.