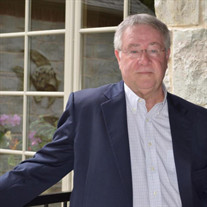 Toby Goodman, 72, of Mansfield, TX passed away peacefully on Sunday, July 18, 2021. Toby was born in Wichita Falls, TX on November 2, 1948. He was the first born of Dobbie and Johnnie Goodman's five children. Toby grew up in Wichita Falls and after graduating from Hirschi High School in 1967, he attended TCU, earning his B.A. in 1971. He then continued his education at Baylor University, earning his J.D. in 1974. Toby's long and distinguished law career began in 1974 as a City of Arlington Assistant Attorney. In 1977 he left the City Attorney's office to enter into private practice as a family lawyer, an area that he continued to work in until his passing. During his law career, Toby served as Director for both the Tarrant County Family Bar Association and the Arlington Bar Association. Toby also had a long and distinguished career as a public servant that began with his service as an Adjunct Professor at UTA from 1974 to 1984. Toby faithfully served the cities of Arlington and Mansfield as state representative for District 93 from 1991 through 2007. His substantial legislative accomplishments reflect his intellect and work ethic, as well as the respect he enjoyed among his colleagues. He was loved for his sense of fairness and world class sense of humor. He was a pioneer in juvenile justice reform, working to rewrite the code in 1995. These changes were considered landmark and have been used as a model around the country. He was a tireless advocate for Family Law in the legislature, rewriting much of the Family Code. Toby was a steadfast advocate for the City of Arlington and the City of Mansfield. While in the Texas Capitol, Toby fought for more support for UTA from the UT System to become a Tier 1 institution, increased support for development and research, secured funding for the ERB building, and in 2004 was named a UTA Honorary Distinguished Alumni. During his tenure as state representative, Mr. Goodman served on numerous committees and taskforces. Among some of these committees, he served as Tarrant County Civil Justice Task Force chairman, House Committee on Juvenile Justice and Family Issues chairman and vice chairman, Governor’s Juvenile Justice Taskforce chairman and Attorney General’s School Violence Task Force chairman. Mr. Goodman’s numerous honors include being named among the Ten Best Legislators by Texas Monthly, Ten Best Legislators in the Family Law Section from the State Bar of Texas, Legislator of the Year by the National Child Support Enforcement Association, Legislator of the Year by the Texas Council of Child Welfare Boards and a Tarrant County Family Law Bar Association Certificate of Distinction. Toby was known for his love of TCU football, his contagious laugh, traveling, fine dining, researching history (particularly Biblical history), devotion to family, telling stories and for taking care of people. Nothing gave him more pleasure than helping people. Toby was preceded in death by mother, Dobbie Goodman; father, Johnnie Goodman; brother, Mike Goodman, and former wife Lissa Latigo. He is survived by his wife of 38 years, Gloria; children, Brian, Lauri and Christie Goodman; sister, DeDe Goodman; brothers, Gary and Joe Goodman; grandchildren, Kaleigh and Abbie Goodman, Jordan and Jackson Dismang, and a multitude of nieces, nephews and cousins. Graveside services will be 2pm Friday, July 23, 2021 at the Texas State Cemetery, 909 Navasota St, Austin, TX 78702. Arrangements entrusted to Blessing Funeral Home, 401 Elm St. Mansfield, TX 76063 (817)473-1555

Toby Goodman, 72, of Mansfield, TX passed away peacefully on Sunday, July 18, 2021. Toby was born in Wichita Falls, TX on November 2, 1948. He was the first born of Dobbie and Johnnie Goodman's five children. Toby grew up in Wichita Falls... View Obituary & Service Information

The family of Toby Ray Goodman created this Life Tributes page to make it easy to share your memories.

Toby Goodman, 72, of Mansfield, TX passed away peacefully on...

Send flowers to the Goodman family.