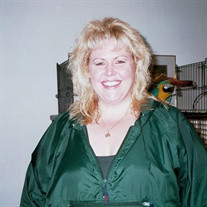 Tracey Kathleen Harvey, 53, died unexpectedly January 6, 2020 in Mansfield, TX. from complications of the flu and pneumonia. She was born May 27, 1966 in Southfield, MI. as Tracey Kathleen Demchyna. Tracey lived in various areas of Michigan and then settled in Brighton and married Clint Harvey in July 1995. After giving birth to two beautiful children and caring for her grandmother, the Harvey family relocated to Texas. She worked in the Mansfield School District in various capacities for over ten years and for the City of Mansfield Law Enforcement Center for five years. Tracey was a beloved daughter, wife, sister and friend but her most valued roles were as Mom and Grandma. She was often heard saying that her kids were her best accomplishment. She was so proud to be a part of their lives and loved to share tales about them. Tracey felt blessed to have the opportunity to care for her grandchildren who brought her so much joy. She was an avid animal lover and finder of lost souls. Many misplaced friends and rescued animals have found a home at the Harvey household over the years. Tracey was preceded in death by her brother (Joshua Culver), her uncle (Barry Dillard), her grandmothers (Alice Demchyna & Mary Dillard), her grandson (River Harvey) and her father, Ronald Demchyna. She is survived by her mother and step-father, Sandra & Don Dillard, her husband, Clint Harvey, her son, Casey Harvey (Miriam), her daughter, Cassidy Harvey (Daniel), her grandkids, Casen & Tennessee Harvey, her brother, Jordan Demchyna (Olivia), her sister, Janna Demchyna (Chris) and extended family and friends. Tracey will be deeply missed but her family is comforted by knowing that she is pain-free and surrounded by loved ones. A private celebration of her life will be held Friday, January 10th.

Tracey Kathleen Harvey, 53, died unexpectedly January 6, 2020 in Mansfield, TX. from complications of the flu and pneumonia. She was born May 27, 1966 in Southfield, MI. as Tracey Kathleen Demchyna. Tracey lived in various areas of Michigan... View Obituary & Service Information

The family of Tracey Kathleen Harvey created this Life Tributes page to make it easy to share your memories.

Send flowers to the Harvey family.