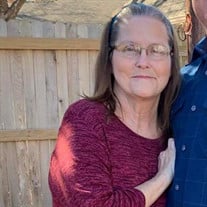 Violet Marie Burnett Beloved mother, grandmother, sister, and friend. Violet passed away on May 11, 2022 at home with family nearby. She fought a hard fight against colon cancer. Violet was born on February 24, 1956 in Charleston, West Virginia... View Obituary & Service Information

Send flowers to the Burnett family.