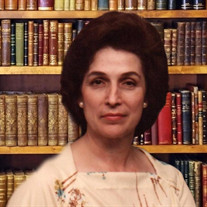 Ginny, as she was known to family and friends, was born on June 2, 1934, in Camden Point, Missouri where she was raised by her parents Nelson J. and Esther Florence Stubbs. She was predeceased by her husband of over 52 years Robert D Brown, parents Nelson and Esther; sister Mildred and brothers Donald, Nelson, and Richard. She is survived by her daughters: Linda Harrison, husband Bill; Laura Bebermeyer, and sons Philip Brown, wife Frankie; Robert Brown Jr. As well as 8 grandchildren and 6 great-grandchildren. Twice married she began her life with Bob and the kids in Excelsior Springs, MO then built a house in Dearborn, MO where they lived until the call of greener pastures brought them to Texas in 1972. The kids, a blonde German Shepard named ‘Sam’ and two cats along with luggage were piled into an old column-shift Plymouth Valiant station wagon with no air conditioning in the middle of summer. If you’re thinking miserable, you would be right. After settling into a house she had never laid eyes on, purchased by husband Bob, she began building a life for her young family in what is now Arlington, TX. She helped support the family by working as a legal secretary at various times for a handful of small legal practices before eventually getting a job as a Stenographer at General Dynamics, now Lockheed, in Fort Worth, TX. She retired at the age of 62 but was always well regarded by those she worked with. While she did work outside the home for most of her adult life, I believe she would tell you that her most important and fulfilling work was that of Mother and Grandmother. The roles for which she will be most fondly remembered. She enjoyed reading, listening to music, playing the piano, sewing, working puzzles, cooking for family, travel, and being outdoors. She always had a song in her heart. Some of her fondest memories were of her and sister Millie sitting at the piano singing tunes. Their favorite of course was ‘Sisters’. She would often break out in song when she heard a phrase that reminded her of an old tune. Her repertoire seemed endless. She loved the book Mistral’s Daughter which she read multiple times evident by the well-worn copy on her bed stand. She sewed clothes for school and special occasions, made each of her kids a quilt and created costumes for school plays. A couple of memorable costumes are Rudolph the Red-Nose Reindeer and a Carrot. New Year’s Eve was commonly spent with her and her sister putting together a puzzle, sipping on wine, and making each other laugh. She travelled to most, if not all, of the 50 states during various road trips with her husband Bob, Sister Millie, and her husband Jim. Later, she and Millie would jump in the car for a couple of weeks at a time after having planned out the route together. During retirement she enjoyed being outside and doing yard work. After picking up sticks in the yard, she would mow the front yard with what she called her ‘pull along mower’ which was really a self-propelled mower which moved faster than she did. She also became an avid fan of the Texas Rangers and wouldn’t miss a game on TV. Mom was never happier than when she was surrounded by family. Birthday dinners where your favorite meal and dessert were the order of the day. Holiday dinners with as many as possible crowded around the dining table along with kid’s tables placed wherever there was room. For Christmas, she always baked chocolate chip cookies for everyone. To get your cookies, you just needed to find the ornament with your name on the tree and trade it for your cookies. She will always be remembered by those who love her as being gentle, hardworking, loving, kind, funny, creative, musical, playful, and steady as a rock. She was always there for you no matter what. To her, family was ALWAYS first. Just days after her 88th birthday, Mom passed away at home just as she had always wanted and will be reunited with husband Bob at the Dallas-Fort Worth National Cemetery at a time to be determined. She will be greatly missed but we will all see her again in our own time. If you would like to donate in lieu of flowers, her favorite charity was the St Jude’s Children’s Hospital.

Ginny, as she was known to family and friends, was born on June 2, 1934, in Camden Point, Missouri where she was raised by her parents Nelson J. and Esther Florence Stubbs. She was predeceased by her husband of over 52 years Robert D Brown,... View Obituary & Service Information

The family of Virginia Ann Brown created this Life Tributes page to make it easy to share your memories.

Ginny, as she was known to family and friends, was born on June...

Send flowers to the Brown family.