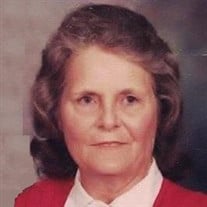 Virginia Lee (Herring) Shipman was born May 18th, 1934 in Italy Texas to Luther and Mamie Lucille Herring. One of 12 children she grew up in Texas. Virginia was taken out of school before finishing the 4th grade so that she could work in the fields with the family to help support them. Virginia wed Jim Ebben Shipman on March 29th 1952, and gave him four children; William Wayne, James Edward, Froina May, and Mary Beth. They were married 62 years. Virginia was a devoted wife and mother. She cared for and guarded her children even though she had to work in the fields, and processing plants to help support her family. Virginia stood by Jim (who had a restless spirit) so they moved around often. No matter what or where the house was Virginia prided herself on making it a clean home for her family. Virginia finally found home when they were able to buy a house at 908 North Street, Mansfield, Texas. This was her piece of Heaven on earth, and even though she sometimes had to work two jobs to pay it off she would finish raising her youngest daughter Mary, and Virginia would live out the rest of her life in it. Virginia was a true Saint of God as she was always there for friends, and neighbors who needed help. She helped many through illnesses and some through their passing. Virginia also cared for her family in their times of need. She cared for her mother Lucille, her son William, and lastly her husband Jim until their passing. She was also there for her numerous Grand, Great, and Great Great Grandchildren by attending birthdays, and Grand Parents day at school as many still remember. Virginia really loved children and babies. Virginia was also a devoted Christian who helped in the church as needed. She worked behind the scenes and would be found mowing the Church grounds, cleaning the Church, or working in the Church kitchen. Even when she could no longer go to Church she would watch Sunday Services, and try to follow in her Bible. Virginia was also a fighter as she overcame a broken hip and pelvis from a tornado, cancer, back surgery, heart, and lung disease. Even through all of this she would put others first. I am sure the heavens rejoiced when Virginia accepted the Lord at an early age. Even near death she recalled the two women that would come by and take her to church as a girl. If those women only knew what great fruit those sown seeds would bear. I am also sure there was great rejoicing in Heaven when as she was welcomed by her Jesus with a “Well done my good and faithful servant”. Virginia was proceeded in death by her father, mother, grand daughter Alisa, eleven siblings, her oldest son William, and her husband Jim. Virginia is survived by her children; James, Froina, and Mary with their respective spouses, 9 Grandchildren, 20 Great Grandchildren, and 10 Great Great Grandchildren .

Virginia Lee (Herring) Shipman was born May 18th, 1934 in Italy Texas to Luther and Mamie Lucille Herring. One of 12 children she grew up in Texas. Virginia was taken out of school before finishing the 4th grade so that she could work in the... View Obituary & Service Information

The family of Mrs. Virginia Lee Shipman created this Life Tributes page to make it easy to share your memories.

Send flowers to the Shipman family.