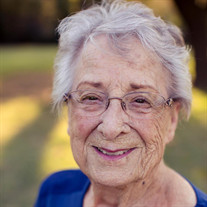 Vivian Dee Fidler went home to her Heavenly Father on December 18, 2020. She was 94. Vivian was born to William Lee and Mary Pauline (Jett) Scarberry on February 25, 1926 in Wellington, Texas. Vivian attended Wellington High School and graduated in 1943. After high school, Vivian attended Bethany College in Oklahoma City for two years. She returned to Wellington and worked at what was then named St Joseph Hospital. While working at the hospital she was encouraged by the nuns and the wives of resident doctors to set her goals higher and continue her education. She did that and eventually took the testing needed for becoming a registered medical librarian. With this accreditation, she got a job at the hospital at Amarillo air force base. In the early 1950’s, Vivian went on a blind date with active-duty airman Charles “Chuck” Dwaine Fidler. Chuck and Vivian dated until their wedding on August 25, 1956. After their marriage, they briefly stayed in Amarillo where their first daughter, Nan, was born. When Chuck was transferred to Vacaville, California, they had their second daughter, Cindy. Chuck’s military career required them to move to duty stations that included Waco, Texas and Selma, Alabama. In 1967, they received orders to move to Clark air force base in the Philippines. Vivian was very excited to be moving abroad and she made the most of her time after arriving. She became active in the Girl Scouts, including camping for the scouts, service projects for the soldiers and traveling to Japan for administrative duties. Upon Chuck’s retirement from the Air Force, they settled back in Amarillo, returning to the place they met. In Amarillo, Vivian returned to college and earned both her Bachelor’s and Master’s degrees from West Texas State University (now A&M West Texas University), to teach medical records at Amarillo College, eventually becoming the head of that department. She taught there for approximately 15 years. She also traveled to area hospitals and worked in their medical records departments as a consultant. Her most recent employer was the Texas Medical Foundation where she enjoyed working from home reviewing medical records for hospitals in the Texas Panhandle. After full retirement, Vivian and Chuck enjoyed international and domestic travel. It was important to her that this travel had an adventurous and educational aspect, informing the already rich perspective that Vivian had achieved in her life. After they saw the world, they settled in Waxahachie, Texas to be closer to their daughters. Chuck and Vivian were married 60 years. Upon Chuck’s passing in 2016, Vivian moved to Mansfield, Texas. Vivian made time to enjoy sewing, canning and crocheting. She enjoyed her family, actively coordinating family reunions almost every year for 35 years. She was an active member of St. John’s Lutheran Church in Mansfield. Vivian was very pioneering for women in the 40s and early 50s. Her early interactions with the Nuns and doctors’ wives taught her how to comport herself with compassion and courage. With this encouragement, she was able to leave Wellington and forge her own path. She worked hard in her career in medical records and enjoyed her work immensely. She made the choice to marry at the age of 30, when she felt she was ready for that step in her life. Vivian instilled this perspective and independence to her daughters. Vivian is preceded in death by her parents, husband Chuck, siblings Marylee Robinson, Peggy Wolfe, Rubye Robertson and Melvin Scarberry. Vivian is survived by her daughters Nan Therese Fidler Hannush and Cynthia Lynn Fidler, granddaughters Lynda Christine Hannush and Susan Michelle Hannush, great grandson Connor James Hannush, great granddaughter Natalie Jane Hannush and siblings Reba Semler and Cloyce George Scarberry.

The family of Vivian Dee Fidler created this Life Tributes page to make it easy to share your memories.

Send flowers to the Fidler family.