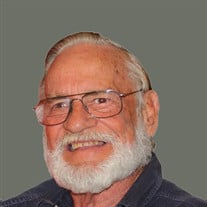 W.M. “Wayne” Ahrlett of Venus, TX. He went home to be with the Lord April 25, 2019 after a long struggle with Alzheimer’s at the age of 83. Wayne was born on August 16, 1935 in Austin, TX to Phillip & Ollie Ahrlett of Llano, TX. He served in the Air Force for 4 years and in the Marines for 8 years. He married Claudette Fay Enberg the love of his life on October 7, 1961 in Llano, TX. He spent most of his life living in Llano, Odessa, and Venus. He was a diesel mechanic, worked in the Oil Field, and on heavy equipment, air crafts, and helicopters. His passions were the outdoors, fishing, his family, and helping others. He will be greatly missed. He is preceded in death by his dad and mom James and Ollie Ahrlett, brother Jim, and sister Maxine. He is survived by his wife Faye and four sons: David and wife Diana of Eastland, Phillip and wife Rhonda of Arlington, Junior and wife Brandi of Wills Point, Robert of Venus. Grandkids: Shayla Day, Joseph Ahrlett, Ryan Ahrlett, Sloan Ahrlett, Latrisha Ahrlett, Aaron Ahrlett, Jessica Harwell, Kayleigh Ahrlett, Robbie Ahrlett, Eryk Ahrlett, Acacia Ahrlett, Julie Finley. Great grandkids: Calib Ahrlett, Liam Ahrlett, Alexandria Day, Parks Day, Landynn Ahrlett, Karter Ahrlett, Addison Densmoore, Hagen Harwell, Hudson Harwell.

The family of W M Ahrlett created this Life Tributes page to make it easy to share your memories.

Send flowers to the Ahrlett family.