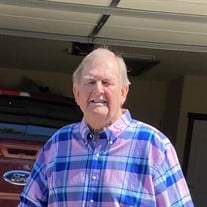 Wayne Thomas Menifee was born in Palacios, Texas on June 30, 1941 to Russell and Velma Menifee. He attended primary schools in San Antonio, and graduated in the first class of Highlands High School - Class of 1959. Wayne maintained lifelong friendships with several of his classmates. Wayne attended and graduated from Texas A&I Kingsville in 1964 with a BS degree in Mathematics. Wayne married Carol Langwell on June 19, 1964. They had a daughter, Leslie, and a son, David. Wayne became a big Texas A&M fan due to many of his friends attending A&M. His son also graduated from Texas A&M. Wayne enjoyed the football games and attended when he was able. Wayne worked as a computer specialist with a number of companies including Zales Jewelry and Triangle Pacific. He became a land realtor, owned a sporting goods store, and for many years was a Farmer’s Insurance Agent. He retired early in 1996 to care for his wife, Carol, a Mansfield educator and principal, who had developed breast cancer. Wayne married Donna McCluer on May 31, 2015, and lived in Granbury at Pecan Plantation where he loved to work on landscape design, entertain and party! He made friends easily and kept in touch with each of them. Recently, he was part of a group of men who tried new restaurants throughout the area, while the wives attended PPWC on Thursdays. Wayne loved to drive throughout Texas and see all of the land, flowers, mountains, rivers, and streams. He was a faithful member of Holy Cross Lutheran Church in Arlington for over 40 years. Wayne is survived by his wife, Donna; his daughter, Leslie Graves, and her husband, Steve, of Pantego; his son, David Menifee, and his wife, Stacy, of Garland; and his step-daughter, Michelle Patton, and her husband, Britt, of Flagler Beach, Fl. He is also survived by a granddaughter, Mollie Graves; 4 grandsons - Luke Graves and his fiance, Nicole, Will Graves, Jack Menifee, and Drew Menifee; 1 great granddaughter, Cora Graves; 2 step-grandsons - Jarrett and Jake Patton, and one great-grandson, Myles Patton.

The family of Wayne Thomas Menifee created this Life Tributes page to make it easy to share your memories.

Wayne Thomas Menifee was born in Palacios, Texas on June 30,...

Send flowers to the Menifee family.