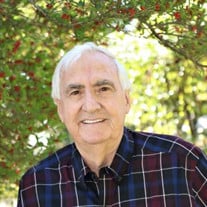 Wilbert Wesley Seeton passed away Friday, October 2, 2020 in Mansfield, Texas at the age of 81. Wes was born on August 21, 1939 in Mansfield, Texas to Wilbert and Ruby Seeton. He was raised in Mansfield, Texas with his two older siblings, Elizabeth and Charles (Cedar). Wes attended Mansfield High School where he graduated with many of his lifelong friends in 1957. After graduating, he worked for his father farming and later began his career with Southwestern Bell where he retired after 31 years of service. Wes met the love of his life in first grade and they continued their education together ending as high school sweethearts. Wesley and Linda Gayle Galloway married, both at the age of 20, in December of 1959 and celebrated almost 61 years of marriage. Together they had two children, Scott and Stacy, to complete their perfect family. Wes was a longtime member of the Mansfield Church of Christ. He was very active in the City of Mansfield, was a part of the Jaycees and helped build Geyer Field. He was a member of the Mansfield Volunteer Fire Department and was an ambulance driver. Wes also was on the Mansfield Planning and Zoning Board, was a Mansfield City Councilman, represented the City of Mansfield in New York at the Municipal Bond presentation and represented the City of Mansfield at the State of Texas certification hearing for the Mansfield Methodist Hospital. Serving his hometown community was something he was passionate about and dedicated his life to. Wes was a caring and loving husband and a devoted father who always put his family first. He loved celebrating holidays, hosting family gatherings and sharing the stories of his life. He had a witty sense of humor and was a man with a big heart. His kindness and generosity towards others created his remarkable character. Our hearts are broken, and our lives will never be the same without him, but he is without a doubt looking down on his family and friends with a smile. Wesley is survived by his loving wife, Linda; son, Scott Seeton; daughter, Stacy David and husband Kelly; grandchildren, Colton Seeton and wife Emily, Tanner Seeton and wife Kaddie, Kelsey David, and Ty David; great granddaughter, Adelyn Seeton; nephew, Jon Seeton and wife Kathy and family; nieces, Shelly Abke and family, and J’Cee Seeton and family.

The family of Wesley "Wes" Seeton created this Life Tributes page to make it easy to share your memories.

Send flowers to the Seeton family.